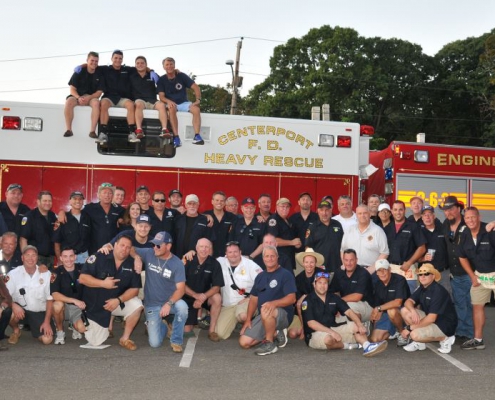 The First meeting was held in the Centerport School on September 7, 1898. A few months later, on December 23, 1898, Articles of Incorporation were obtained. A building committee was appointed at the September meeting, which moved much faster than we do today. Lumber was ordered from Newton Creek, where the largest shipments of lumber into the metropolitan area still arrive. The members, many of whom were carpenters, went to work with real vim and vigor, with the results that the first meeting in the new firehouse was held on December 3, 1898, less than three months after the building committee was appointed.

An open pavilion was erected in the rear of the firehouse. A boardwalk was built on the roof of the pavilion. A platform of locust posts were erected to hold the railroad tire which was removed from the wheel of a Long Island Railroad locomotive, with the railroad’s consent. This iron hoop was our first signal device. A long handled maul was swung against it to sound the alarm of fire.

The first piece of equipment was a hand pumper manned by 20 men 10 on each side. The old baby could throw a stream of water 125 feet. Cisterns and wells were the water supply. Later on a hook and ladder truck was purchased for $600.00 from an upstate fire department. Of course, this was also horse drawn.

The Centerport Fire District was formed in 1924 with the late George H. Miller, first Chairman of the Board. Our first rescue vehicle was a gift from the late William K. Vanderbilt, an honorary member of our department.

Currently our membership consists of approximately 100 men and women who have a strong desire to serve their community. The motivating thought in the minds of our charter members still prevails on a 24 hour basis today.